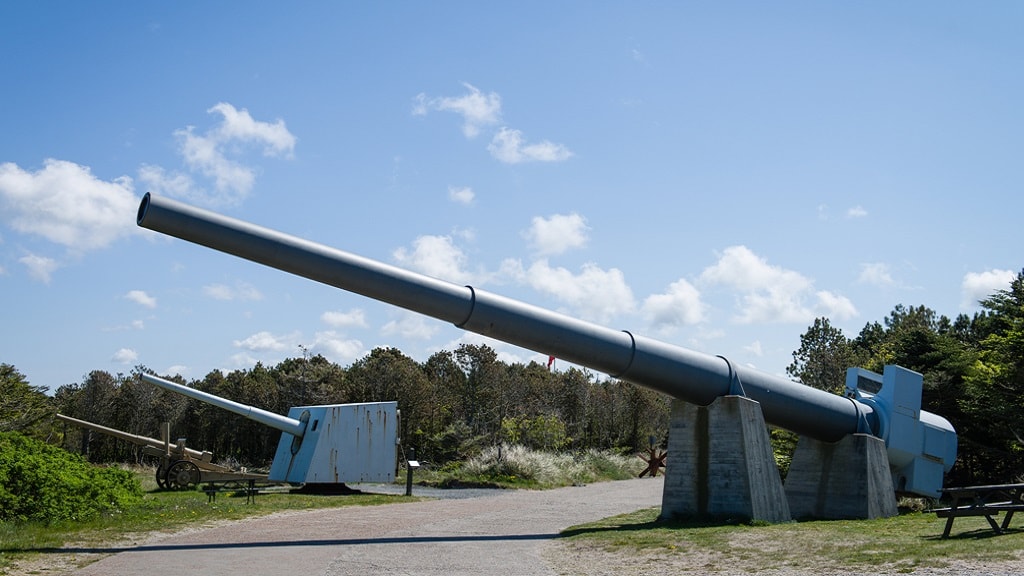 Visit the Bunker Museum Hanstholm and discover Northern Europe's largest battery complex from WWII. It consists of Hanstholm's unique 2500m2 museum bunker, where several of the rooms have been restored to their original appearance, so you can see how the soldiers lived. In the bunker there are also some exciting exhibitions.

The battery was built in 1941 together with a similar battery at Kristiansand in Norway, blocking the entrance to the Skagerrak, to keep the English fleet out. The battery consisted of four large 38cm guns, each of which had a weight of 110 tons. The guns could fire a distance of 55km... almost halfway to Norway!

The exhibition center on top of the bunker houses the exhibition "Enemy & Neighbour - Hanstholm occupied!" The exhibition is about life in Denmark's strongest fortress during World War II. With the people in focus, the story is told by both the German soldiers and civilian life in the shadow of the fortifications, and how the occupiers and the occupied lived together.

On tour with the ammunition train

Hop on the museum train and take a tour in and around the battery where you pass through an ammunition bunker and one of the bunkers that housed the 38cm cannon.

The museum train will take you through the historic terrain along the original narrow gauge track that the Germans built to transport the heavy ammunition to the cannons.

The train runs every day during the summer and also in week 42 (Autumn Holiday). The trip is one kilometer long and lasts about ten minutes.

Scenic walks in the occupants footsteps

At Bunker Museum Hanstholm you will find a beautiful and varied forest that was before, just a bare and rugged dune landscape and home to many of the german army’s bunkers. Today you can go on wonderful walks in the nature here.

Explore the many bunkers scattered across the landscape, some underground, others built as lookout points whose foremost role was to spot the enemy.

During the year, there are also several guided bunker walks which are free to participate. The dates for the bunker walks can be found on the museum's website or facebook page.

In the sand dunes south of Hanstholm you will find the open-air museum Hanstholm 1, which is one of the best preserved coastal batteries in Denmark.

The Open-air Museum Hanstholm 1 is also part of the Bunker Museum Hanstholm, so start or end your museum day with a visit to the sand dunes. It’s a great experience for the whole family to walk around the hilly bunker landscape.

Explore the beautiful, undisturbed surroundings and see if you can find all 19 bunkers. They are pretty much all open, so you can go inside and imagine what it was like to lie there and guard a part of the Skagerrak from land.

The Atlantic Wall in North Jutland

In collaboration with other bunker museums in North Jutland, and out of approx. 100 local WWII bunker locations, we have selected 24 of them which we think are really worth a visit. There is an info board at the locations, giving information about the site and its history. Using a QR code on the poster, you can enter the new website via your smartphone and find more information, maps, historical photos and more. You can also use the link here: www.atlantvolden-nordjylland.dkk

Follow us on Facebook and get updates about what’s going on at the museum as well as interesting stories and pictures from WW2, Hanstholm and the surrounding area. https://www.facebook.com/BunkermuseumHanstholm